Some nice reviews have been coming in for Joy’s Reflection is Sorrow – here’s a selection:

Folk Radio UK: ‘There are many factors that make Joy’s Reflection Is Sorrow a wonderful album. The musicianship is great … Kraus’s voice has found a new confidence and the rolled-back arrangements and production allow the songs room to breathe and speak. But perhaps the most important thing, in a world in which instant gratification and long-term despair are increasingly held up as the only options, is the sense of a lasting optimism that goes beyond the span of a human life, that perhaps even defines the nature of human life. Kraus may not be able to answer those big questions – maybe they are unanswerable – but she has found the best possible way to ask them.’

The Wire: ‘Like the tarot image on the album sleeve, Kraus deals love and loss in equal measures, and sees them as part of the same cycle. While the title song savours the joys of each season, it does so with full awareness that the world will outlive the person loving it. But generosity and generative action get the last word here, refuting death and greed.’

Delusions of Adequacy: ‘Kraus’s best and most accessible long-player to date, which seamlessly entwines her most intimate traditionalist songwriting inclinations with more her sonically adventurous tendencies… for an eight-track album so consumed with death and dying, Joy’s Reflection Is Sorrow is paradoxically brimming full of artistic life.’

Terrascope: ‘Joy’s Reflection Is Sorrow flows like journey upon a becalmed river, even if that body of water sometimes resembles the mythical Styx. Drink deep of this and you will be fulfilled.’

MOOF: ‘… both unearthly and, whilst inviting, also unnerving. This is Kraus’ forte, to merge beauty and melody with an edge that keeps things unpredictable and often deliciously otherworldly.’

Soundblab: ‘Joy’s Reflection Is Sorrow continues that marriage of styles, eerie goth-inflected vibes softened by traditional folk’s sweet harmonies, revisiting the dichotomy of dark/light, soft/hard, joy/sorrow and pushing through the sorrows life throws at her to find that joy anxiously, perhaps trembling timidly while it waits on the other side of the mirror.’

Fatea Magazine: ‘There’s something both unsettling and comforting about Sharron’s latest opus, and the qualities coexist in music that’s both stimulating and reassuring. In the end, the prevailing current of this fine album is that of optimism in the face of despair – which can only be a good thing.’

There’s a nice feature in the current issue of Shindig! magazine (issue 82): 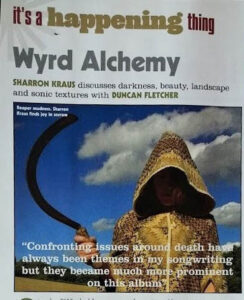