The postman recently brought my contributor copies of a new compilation album and book. The album is ‘Gathered Leaves’, a compilation of tracks from the CD’s included with Ptolemaic Terrascope magazine, released by Sugarbush Records. It features an old banjo track of mine that was recorded by Jeffrey Alexander along with tracks by The Bevis Frond, Six Organs of Admittance and Damon & Naomi with Kurihara. It was a really nice surprise, as I hadn’t realised it was being compiled. A blast from the past!

The book is Harry Smith’s Anthology of American Folk Music: America Changed Through Music, a collection of essays published by Routledge that I was invited to contribute to. My essay is entitled ‘How Weird is Folk?’ and it looks at differences between the way folk music is perceived in the US and the UK. It’s very exciting to be included in an academic publication like this, as I left academia for music about 15 years ago and have recently been reconnecting with the academic world, writing papers for conferences that explore ideas that relate to the music I make. 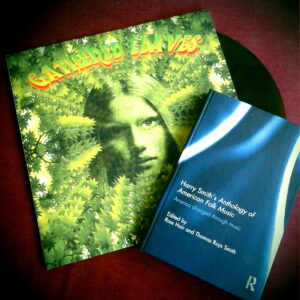