I’d been excited about playing at I Thought I Heard A Sound before the event but when we turned up at the venue – a huge, empty and echoey abandoned Co-op building – my excitement ramped up a notch. Before things kicked off, my chums and I had time to wander around, through the main department store hall with its dusty and faded signs for ‘Fashion’, ‘Menswear’, ‘Haberdashery’, looking out of the windows onto a bustling high street, whilst enclosed in this cocoon that felt trapped in the past. 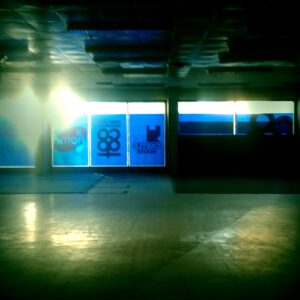 We found a table and chairs left as if in a hurry, with a vase of plastic flowers and a can of polish left with the lid off. Then a room that contained heavy iron weighing scales. We readied ourselves for potential attack as we sidled single file down a corridor that looked like it could contain cybermen or other ancient Doctor Who baddies. 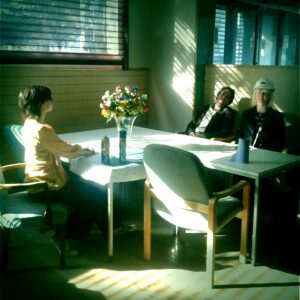 That we’d been given access to this strange space was amazing – it’s surely the most exciting venue I’ve ever played. That these spaces lie empty and unused for the most part is a waste. Is it just because I was weaned on a particular era of low-budget BBC TV drama that I love the feel of a place like this, or is it something that anyone would get a kick out of? Maybe just being in a place that’s a kind of ghost of its former self is exciting enough.

Talking of low-budget BBC TV drama, and ghosts, The Stone Tape was shown as part of the day’s programming. It’s one of those supernatural/scifi stories in which ghostly phenomena are investigated ‘scientifically’, to disastrous consequences. It’s an enjoyable watch, especially when you’re in a place that feels like it’d be pretty scary to spend a night in alone. There’s a menacing BBC Radiophonic Workshop soundtrack, Jane Asher as a whizz computer programmer who’s sensitive to what she takes to be a ghost, but what investigations seem to show is a kind of recording of the past trapped in the stone of the building (hence ‘Stone Tape’). 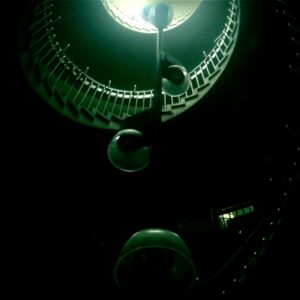 Being in such an atmospheric building, it doesn’t take belief in the somewhat dubious idea of recordings stored in stone to imagine that all kinds of weird and wonderful things could be triggered in the imagination by an extended stay in a suitable location. If Jeanette, Nancy, Darren and I had been left behind, trapped in this building for a week, I’d guess that we’d start to experience unnerving things.

Before the old Post Office section of the Co-op gets turned into a small cinema, though, there’s the Folk Panel, during which Jeanette Leech, Alex Neilson, Mark Goodall, Arianne Churchman, Rob Lee and myself discuss questions like ‘Is the idea of folk culture an utopian ideal?’ and ‘Who do you view as the natural heir to the English folk canon?’. As an ex-academic it gave me a kick to be combining discussion on a subject I’m interested in with playing music. That’s something I’d like to do more of – let’s have more gigs that include panel discussions! It was interesting to hear everyone’s take on things, though as ever, I wished there’d been a chance for the discussion to carry on in a less formal way through the night, over several bottles of wine!

Arianne Churchman’s performance drew on elements of different harvest traditions and was a nice balance of ritual solemnity and fun. That she ceremoniously flipped open bottles of delicious Harvest Pale ale whilst doing morris dance steps was pretty great, but that she offered the bottles to us to drink afterwards made it real somehow (and the beer was delicious!) You can read Arianne’s description of the performance here.

The musical part of the night was in some ways less exciting, because more of a normal occurance. But it always makes me happy to sing with Nancy Wallace, and our voices sounded nice in that big hollow space. C Joynes was fluent and mesmerising in a flowery blue shirt, and Trembling Bells were a somewhat crazed but perfect end to a strange and wonderful day.

Rob Lee, who organised this event (as part of Sensoria 2013) is threatening to put on more in the same vein. I can’t wait!